The plague visited our house over the course of the last week.  The only ones spared were John and I.  How did we get so lucky?  I have NO idea, but I am very very thankful.


The upside of a three year old with the stomach flu?  They understand the concept of a barf bucket!  Hooray!  You count your blessings at times like this.

By that night we had lost Will also.  Over the next few days we went through the ups and downs of getting better, but not all the way better.  We went through the waking up every hour crying, every night, for several nights.  And finally, late on night while crying Landon told me his ear hurt.  Thank goodness for being able to vocalize their pain, too.  Once again, counting blessings.  It was at this point that I found myself in tears.  I had been so frustrated with him for waking up crying and then wanting nothing and needing nothing for two nights straight that I had started to get angry.  It was at that moment that he told me his ear hurt him and I realized he really was in pain, it wasn't like the other nights where he woke up just because he was afraid of being sick.  And that was when I felt like a terrible person.  I was so tired, I was worn down, and I couldn't take his pain away and I couldn't help but feel like a failure.  It may be irrational, but I am nothing but human and a Mom.  And what Mom doesn't feel like a failure now and again?  So I cried a little, prayed, and reassured myself. 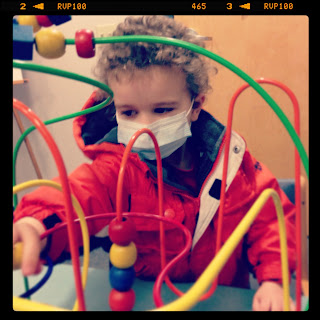 The next morning John took Landon to the Dr.  And as we suspected, he had an ear infection.  But the poor kid had a double ear infection!  After just one dose of antibiotics he was back to his old antics driving us nuts!  But poor Will suffered a few more days of restless nights, jags of crying, and one night spiked a fever of 101.  By the end of the week he too was at the Dr. suffering from a double ear infection (and a bad case of the teethings).  Getting him back to normal hasn't been so quick.  But he is on the mend and getting less fussy every day.
I can't wait to have my boys back to health again.
Posted by Corinne at 9:06 PM